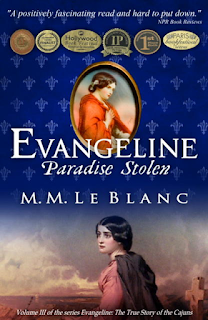 Award winning author M.M. LeBlanc will sign and read from her book, “Paradise Stolen”, the third and final volume of an historical fiction series "Evangeline, the True Story of the Cajuns" on Sunday, February 2, 2020 from 1:00 p.m. to 3:00 p.m. at Artworks Studio & Gallery at Villagio Town Centre, 13700 Perdido Key Drive, on Perdido Key.  For more details contact Talis at 850-261-9617.

Winner of 6 book awards, this final volume in the thrilling saga of betrayal, intrigue, loss and hope, tells of the journey of the French Acadians and star-crossed lovers Evangeline and Gabriel.  It follows them from France to Acadia/Nova Scotia and to their exile throughout the Colonies, Europe and the Caribbean, ultimately reuniting in Louisiana.

Separated and scattered to the winds in 1755, the lives and fates of ten families intertwine from King Louis XV and nobles to commoners in the exciting conclusion telling the true story of the Acadians, the ancestors of the Cajuns.

This book is based on the true story of the author's ancestors, including René Le Blanc, featured in the famous poem ‘Evangeline, A Tale of Acadie’ by Henry Wadsworth Longfellow.

M. M. Le Blanc is a multi-award-winning author of sixteen books of fiction and non-fiction and numerous award-winning screenplays. Her trilogy Evangeline: Paradise Stolen has won six book awards and was selected as an Official Gift Selection for VIP filmmakers at the Sundance International Film Festival. Her film, Cajun Renaissance Man, was an Official Selection at international film festivals in Cannes, Montreal, New York, New Orleans, Chicago and many others, and won the “Audience Favorite Film” Award. Le Blanc is a frequent speaker at historical and genealogical conferences as well as film festivals from Cannes to China.

Le Blanc was selected one of the “Top Ten Working Women in America,” and was awarded an international Writing Fellowship from the Fondation d’Art Paris-New York and is a member of the Academy of Television Arts and Sciences. 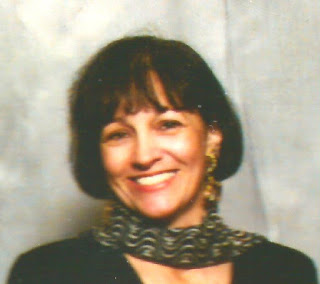 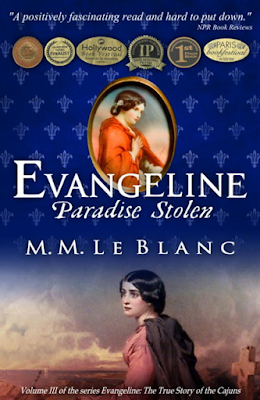 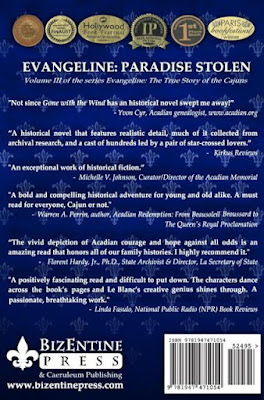