Artworks is bringing a new combination to the Villagio - locally crafted pottery filled with locally grown basil! For all of you home chefs out there, basil is a tasty recipe ingredient that adds flavor and aroma to pasta, fish, chicken and more. Just chop up a few leaves and add them to your dish. Plus, the basil sold at Artworks is grown right here on beautiful Perdido Key; and these live basil plants are potted in hand-made containers made by local Perdido Key artisans. The combination goes two-fold in helping our area artists and horticulturalists.

We hope to see you there.

Basil Pesto is a sauce or dip traditionally served with pasta and chicken, but be sure not to limit yourself to just pasta and chicken. Pork chops and fish go with a creamy basil pesto sauce just as well. Basil Pesto is an excellent addition to many meals; and it is usually made of basil, garlic, nuts, cheeses, olive oil, salt and pepper. Preparation time is very quick and only a little stovetop time is needed. This particular recipe is brought to us by Kevin Clark, Joel Smith and Noah Moseley.

Basil Pesto is so amazingly easy to make and it is subject to your own creativity and preferences. We roast the nuts and garlic in a little bit of olive oil and then pour that over the basil leaves in a food processor and mix in the lemon juice, grated cheese, salt and pepper. You decide how fluid you like the pesto, how spicy, how salty, peppery and how blended. Some people prefer a rough, choppy pesto. Other people prefer a smoothly blended pesto. It all comes down to what you prefer. 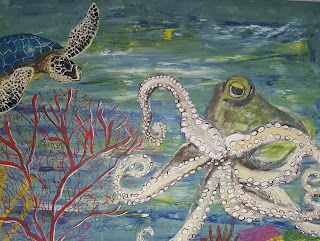 June was born and raised in Pensacola, Florida. She married her best friend Doug Morrison and they have one son named Alex. June started drawing and sketching in elementary school. In the 70's the local newspaper, (Pensacola News-Journal) had weekly art contest for children, which she entered and won several times. After high school, June put her talent aside for years. She decided to revisit her artistic side in her early 40's and tried painting for the first time. June loves painting beachy, whimsical things that make people smile! She prefers acrylic paints. Stop by Artworks and check out June's beachy scenes, animals, etc., of Pensacola, on several types of surfaces such as reclaimed wood. June will also do special commission on furniture and pillows. 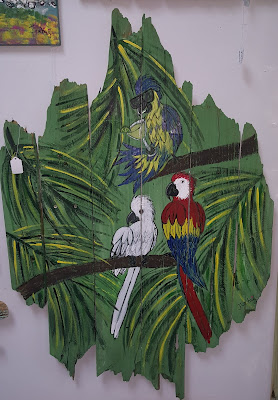 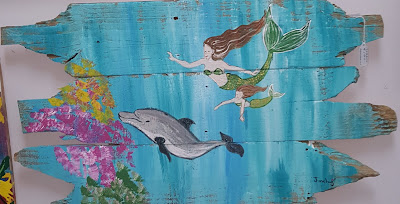